Jacqui Stevenson from Holywood is getting ready and set to lead two relay teams into the Deep RiverRock Belfast City Marathon on 7th May in aid of learning disability charity Mencap.

This is the second time Jacqui has taken part in the event in aid of Mencap, inspired by the support the charity provides for her two-year-old son, Will, who has Down’s syndrome.

In 2016, Jacqui helped raise over £6,000 of valuable funds for Mencap through her relay team ‘Where there’s a Will, there’s a Way’ and hopes to top that figure in 2018, Mencap’s third and final year as official charity partner of the race.

Will attends the Mencap Children’s Centre in Belfast, which is run in partnership with the Belfast Health and Social Care Trust. Jackie explains:

'Taking part in the Deep RiverRock Belfast City Marathon is our way of helping raise awareness of Mencap’s services and much-needed funds to support them.'

'We have two teams – one is ‘Get Some Will Power’ and the other is Get More Will Power’ – named after our brilliant Will!' 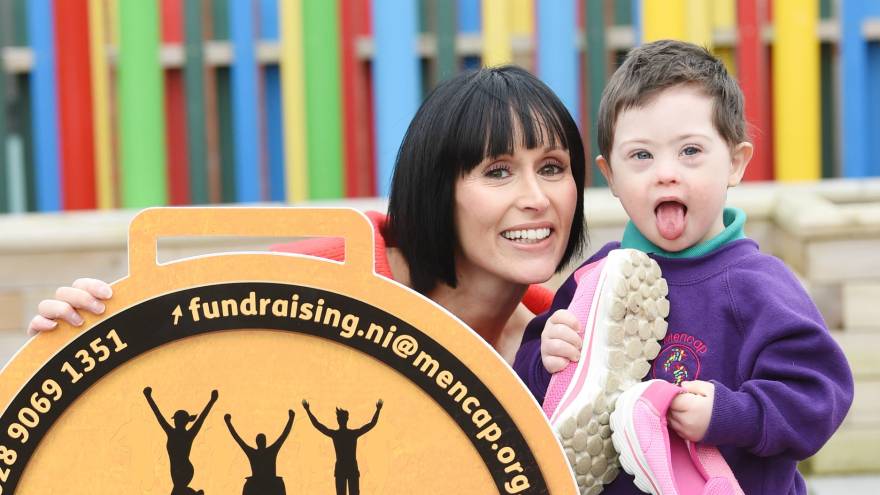 'Since joining the Mencap Children’s Centre last September, Will has settled in well and the relationship he, and we as a family, have formed with the team there is so special.'

'I can’t say enough about the team at Mencap – they are not just specialists in learning disability, they are a crucial part of our support network.'

Speaking about the impact of Mencap’s services, Jacqui continued:

“I would like to tell other parents of children with a learning disability to try not to be afraid of reaching out to Mencap. When Will was born, there were a lot of unknowns for us and there is no denying that is was a challenging time for us – I’m sure other parents could relate to that.

“We quickly learned though that we wanted to embrace Will’s learning disability and help him reach his full potential from an early age – which is exactly what Mencap is helping us do. Once we connected with Mencap we no longer felt like we were alone and that feeling of reassurance, support and understanding has never stopped.”

Jacqui hopes that other people will be inspired to make a last-minute sign up for the full Deep RiverRock Belfast City Marathon, Wheelchair Race, Team Relay, 8 Mile Walk or Fun Run – or donate funds in aid of Mencap through supporting someone taking part in the event.

Anyone interested in supporting Jacqui or getting involved in the marathon can email fundraising.ni@mencap.org.uk or call 028 90 691351.