Eoin attended the Mencap Children’s Centre in Belfast last year. We spent some time with this very determined little boy, and had a chat with his mum about how Mencap Northern Ireland has helped Eoin, and his family.

Eoin is a very happy, content and determined little four-year-old boy. He loves music and lights and really enjoys spending time in the company of other children. Eoin has an extremely rare, genetic condition called Cri Du Chat syndrome.

Eoin attended the Mencap Children’s Centre in Belfast last year. We spent some time with this very determined little boy, and had a chat with his Mum, Ann Marie about how Mencap Northern Ireland has helped Eoin, and his family.

Ann Marie said: “During my pregnancy with Eoin, I had a feeling from very early on that things weren’t just as they should be. At 28 weeks, it became clear that our much loved and much longed-for baby had some problems. I had regular scans and appointments from that point onwards, and at 36 weeks we were told that our baby had stopped growing.  Our consultant decided that it was time for us to meet our tiny bundle of joy. When Eoin was born, he had problems breathing, he was resuscitated and was whisked away to Neo Natal Intensive Care before we even got to see him.

A few hours later, a consultant came to see John and I, and detailed a long list of issues that our baby had, and then told us he was unlikely to survive. We didn’t meet Eoin for several hours after he was brought to Neo Natal and I have never been so terrified.    He weighed just over 3lbs and was in an incubator, hooked up to monitors and alarms and oxygen. I didn’t even get to hold him until he was 5 days old.

After a week, Eoin had to have Tracheostomy surgery, to help with his breathing where he was given an artificial airway. This was a real game changer, as for the first time he could breathe on his own, he no longer needed oxygen and he was moved from an incubator into a little crib.

It took 6 weeks to diagnose Eoin's condition, because it’s very rare and there are so few in Northern Ireland with the Syndrome, many professionals had never come across another child with the condition.  When we finally got the diagnosis, we were strangely relieved as we knew that the news could have been a lot worse and although it’s a life-limiting condition, we would finally get to have our family all together at home. 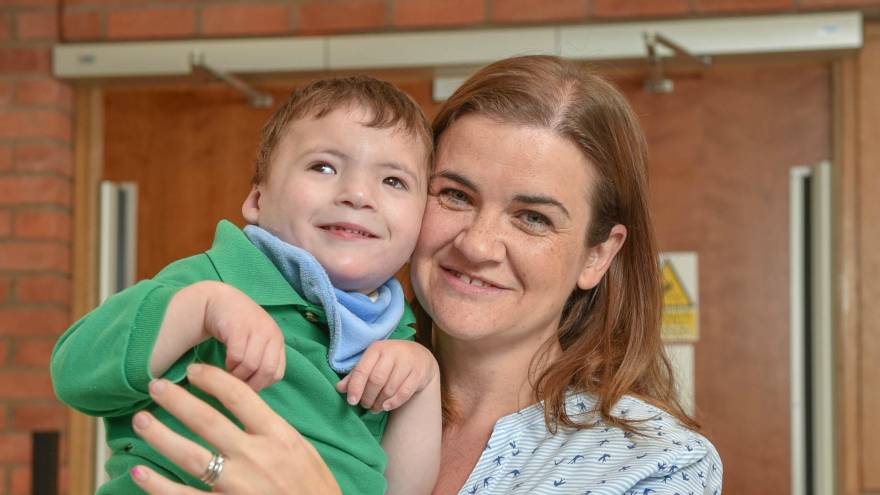 ‘Eoin is a little blessing and has brought our whole family a lot closer together. He is very active, loves to roll around and enjoys playing with his brother and sister, who absolutely adore him.’

Once we received the diagnosis, we immediately began the training that was required to allow us to take care of Eoin. It was terrifying to think that we couldn’t care just for him ourselves but everyone at the hospital was brilliant, we had a lot of support from them. My husband, John was an absolute rock – this was a very difficult and stressful time, but he was positive, and practical and he amazed the doctors and nurses with how quickly he picked up the complex training.  I found the training very challenging, but John encouraged me to keep going so that we could take Eoin home.

Being in the hospital for so long was extremely difficult for us. We had a three-year-old boy at home who we couldn’t spend any time with. John was working full time as well. So, we were both mentally and physically exhausted.

While we were in hospital, Eoin had one-to-one care 24 hours a day.  Apart from one very short walk around the hospital car park, we had never been alone with Eoin, and had never had full responsibility for his complex care.  When he was discharged from hospital, we were on our own and felt very isolated.  Thankfully, we had a brilliant community nurse, who was definitely our biggest support.

We also had very supportive family and friends, and for that we feel genuinely blessed, but as much as they could empathise with us, they didn’t truly understand how we felt or what we were going through.

When Eoin was 2, our community nurse told us about Mencap and that there was a possibility Eoin would be able to go to the Mencap nursery. At that stage, Eoin was about the size of a 6-month-old, he was so tiny and dependent on us that I couldn’t even imagine it happening.

I was told to apply, make the referral and see what happens. Eoin had been to over 350 appointments by that stage and I had attended every one. John and I were the expert in his care so to think that he would come to the Mencap Centre and that he would have all his therapies without us was almost unthinkable. Eoin was luckily offered a place at the Centre and honestly, it’s been the best thing that’s ever happened to him and our family. 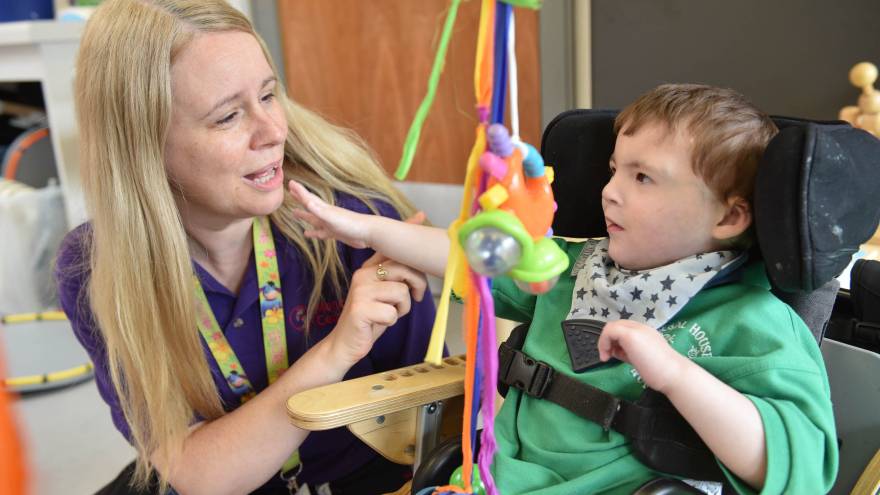 "After the initial few weeks of settling in, when I carried him through the front doors each morning, his face lit up.

When he seen his keyworker he wanted to go to her and reach up to her face and give her hugs - he had never done this before. It sounds like something so small but for us, it was huge."

We knew Eoin was happy at Mencap and so well looked after, this made it much easier to leave our precious boy every day.

Since Eoin started at the Mencap Children’s Centre, I’ve received the most support I’ve ever had. Mencap encourages peer support and it’s been great to meet with other parents who are going through similar things. I have made long lasting friendships with the most supportive people. Together we laughed, cried, learned and everyone has been an amazing support to one another. I wouldn’t have found this without Mencap.

Mencap has been the best thing that’s happened to Eoin, and our family. When Eoin started at Mencap, I began to feel that I could have a life for myself again.  I applied for a new job, which I love and I couldn’t be happier with how things are working out. I will always be grateful to Mencap for everything they have done for Eoin, for me, and for our family.