Aodhán has Downs Syndrome and spent a year at the Mencap Children’s Centre in Belfast, where he lives with his brother, Dad and Mum Francine. We talk to Francine about Aodhán and how Mencap has helped.

Francine said: “Aodhán is just a typical wee boy. He loves to play Golf with his brother and daddy, he has his own small plastic clubs and a small proper golf club as well, he loves playing football and imaginative playing, bringing you over a cup of tea and he loves reading his books. He is also a very determined and stubborn boy who learns all he can.

Aodhán started at the Mencap Children’s Centre last year and settled in very well.  Mencap have a phased entrance to the Children’s Centre so it’s not too much at once for the children. And they have a place for the parents during this time so they are not far away, if the child needs any reassurance to help them settle in. But Aodhán settled in very well and didn’t need me at all, in fact we could not get him to leave the place at the end of the day.

When Aodhán was born there was absolutely nothing out there, no support, we were given a few books about Down Syndrome and the milestones your child should reach. Aodhán also had major bowel surgery at 10 days old, so the social worker came to talk to us and explained about some basic assistance you could get to claim back some money on parking. But there was no counselling, advice or support from the system at all. You had to read the books they gave you in the hospital, research the internet, speak to other parents, that’s all there was.

I was in limbo for the first few months, we did not know who to go to for help, but eventually we were assigned a social worker after 6 months and I thought we would have a lot of help then. But she visited once, telephoned once, referred me for complimentary therapies for 6 weeks and then signed us off, that was all the support there was at the time. It is stressful having and dealing with a new baby, but when the child has a disability, there is just so much more you have to deal with and worry about.

I feel totally let down by the system, you have to fight for so much and it takes so long for everything to come into effect. Aodhán was classed as a moderate case and so it took even longer for him to see anyone. It was not until he was 9 months that we got an appointment with the consultant and got registered into a developmental clinic. I feel so let down for Aodhán, he was not getting as much of the support and treatment that he needed. 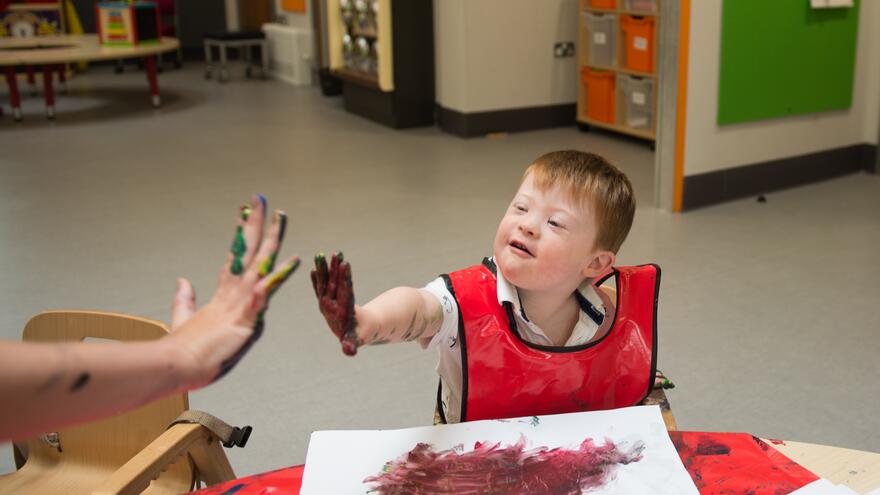 Help is out there

What you really need is someone with experience of learning disabilities who can advise you on what is out there, someone you can talk to you about what support and community groups are available, just to know there is help out there.

Then it all changed when Aodhán went to Mencap, we had more support, people you could talk to or who would find out information for you and Aodhán improved so much.

The early intervention that Mencap provides is brilliant, having all the therapies in one place makes such a difference as the physiotherapists, speech and occupational therapists work directly with the Early Years Key Workers at the centre.

There was also a big improvement in his interaction with other children, the change in his development was huge.  His speech and movement improved so much, Mencap just made him more confident and he just absolutely loved it.

From a parent’s perspective all the staff in Mencap, from those on reception to the key workers in the children’s centre, to the managers where all absolutely amazing. Aodhán’s movement and mobility skills got better every day, even his fine motor skills, his speech is starting to develop a lot now with new words every day, he signs as well, but now it’s more words all the time.

In the future I want Aodhán to go to school, learn how to read and write, go to further education and get employment. I want him to have his hobbies, a life basically, what is to stop him. I want him to lead the same life as his brother and everyone else. Maybe one day he will be in the Special Olympics playing golf or swimming, I have the same aspirations for Aodhán that I have for my other son. The world is Aodhán’s oyster for whatever he wants to do and Mencap has set him on his way, shown what he can do and that he can learn so much more. Thanks Mencap.

Aodhàn and Luca are three years old and attend the Mencap Centre Nursery in Belfast. Here their key worker, Paul Kane, talks about their friendship, and the progress they have made at the nursery.
Read more about Aodhàn and Luca